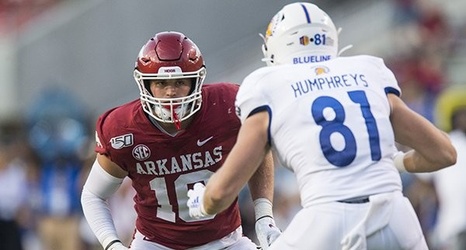 FAYETTEVILLE -- San Jose State's first offensive play against the University of Arkansas football team went for 50 yards on a pass from Josh Love to Bailey Gaither.

It was a sign of bad things to come for the Razorbacks' defense.

The Spartans, who gained 382 yards against Northern Colorado and 348 against Tulsa in their first two games, piled up 503 in beating Arkansas 31-24 on Saturday night at Reynolds Razorback Stadium.

"I think they got us on our heels on the first play of the game," Arkansas Coach Chad Morris said. "From that point forward, these guys, they just needed a little bit of momentum, a little bit of life, and they felt like, 'Hey, we're going to get these guys on their heels,' and you've got to credit those guys.