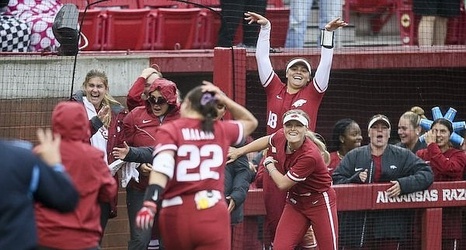 Arkansas players celebrate three runs during the sixth inning of an NCAA Tournament game against Oregon on Saturday, May 21, 2022, in Fayetteville.

FAYETTEVILLE — University of Arkansas softball Coach Courtney Deifel wasn’t sure which team was in better position when Saturday’s game with Oregon reached the later stages of the Razorbacks’ 6-2 victory.

The No. 4 national seed Razorbacks and Oregon were scoreless when the NCAA Fayetteville Regional game entered the bottom of the sixth inning at Bogle Park.

“I didn’t love the feel of the game,” Deifel said.