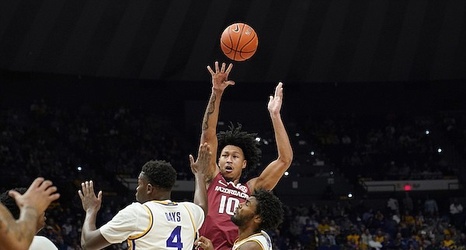 Jaylin Williams had another double-double and a huge finishing stretch to help the University of Arkansas upend No. 12 LSU 65-58 on Saturday at the Maravich Center in Baton Rouge.

Williams had a series of key defensive plays after Arkansas fell behind 56-48, its largest deficit of the game, with 9:01 to play, then drilled a three-point shot from the top of the key with 1:11 remaining to break a tie and give the Razorbacks a 61-58 lead.

Williams said coaches Keith Smart and Gus Argenal told him to be ready to take a big shot.

“ ‘You’re going to get a big shot,’ ” Williams said the coaches told him on the Razorback Sports Network.