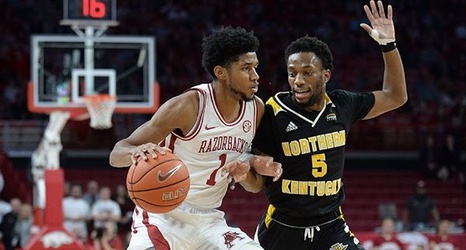 FAYETTEVILLE -- The University of Arkansas men's basketball team found itself in a street fight with Northern Kentucky on Saturday, and Mason Jones wasn't able to throw any punches while Isaiah Joe was swinging but not landing many.

The Razorbacks still found a way to hold off the Norse 66-60 at Walton Arena before an announced crowd of 14,080.

Arkansas (7-0) won its previous five home games by an average of 28.2 points.

"For me personally, I loved it, because not every game is going to be a blowout," said senior guard Jimmy Whitt, who led the Razorbacks with 24 points, 9 rebounds and 2 assists.