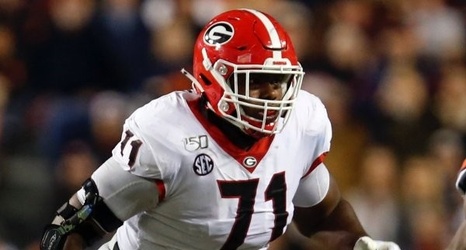 Andrew Thomas, a protege of University of Arkansas Coach Sam Pittman, was announced as the winner of the Jacobs Blocking Trophy on Wednesday in a vote by the league’s head coaches.

Thomas, a 6-5, 320-pound junior from Lithonia, Ga., earned a starting job at right tackle at Georgia as a true freshman for Pittman, his position coach, and became a three-year starter.

He is projected as an early pick in the 2020 NFL Draft.

Thomas is a standout on a Georgia offensive front that has allowed 0.92 sacks per game, tops in the SEC. The Bulldogs average 189.