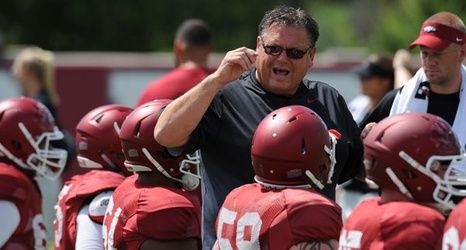 FAYETTEVILLE — Arkansas coach Sam Pittman watched from the back porch of his new Fayetteville home on April 23 as two of his former offensive linemen from Georgia were selected in the first round of the NFL Draft.

The selections of Andrew Thomas fourth overall to the New York Giants and Isaiah Wilson 29th overall to the Tennessee Titans brought to seven the number of first-rounders who were coached by Pittman in college. Thomas and Wilson were both recruited by Pittman and played all three seasons with him as their offensive line coach at Georgia.

Pittman’s reputation as a recruiter and strong teaching coach was key in his hiring as Arkansas’ head coach last year.