On this date in Razorback history, March 31 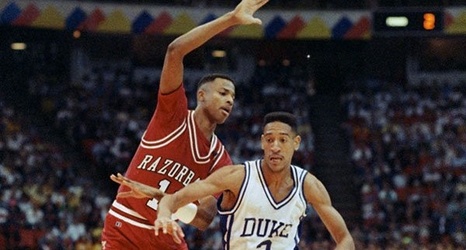 One of the greatest basketball seasons in Arkansas history came to a disappointing end in Denver.

The Razorbacks lost 97-83 to Duke in the Final Four, ending a 30-5 campaign. The Blue Devils lost to UNLV in the championship game two nights later.

Duke began each half on an 8-0 run, but Arkansas battled back each time. Todd Day’s 3-pointer with 12:44 remaining tied the game at 60 and sparked a 12-2 run that was capped by Ron Huery’s three-point play off an inbounds steal to put the Razorbacks ahead 69-62 with 10:38 remaining.