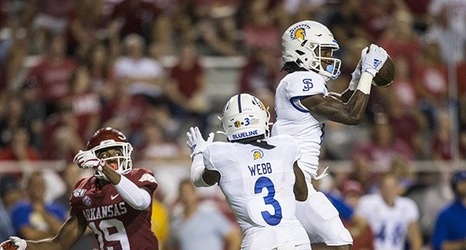 FAYETTEVILLE -- San Jose State flew east with a bag of tricks, plenty of bravado, a heady quarterback and nothing to lose.

The Spartans intercepted University of Arkansas quarterback Nick Starkel five times in their territory, stopped a pair of fourth-down runs and stunned the Hogs 31-24 on Saturday before an announced crowd of 56,058 at Reynolds Razorback Stadium.

San Jose State (2-1) left Arkansas with a $1.5 million guaranteed check -- handing the Hogs the highest-losing payout of the season, according to ESPN's Darren Rovell -- and its first victory over an SEC team in seven meetings.