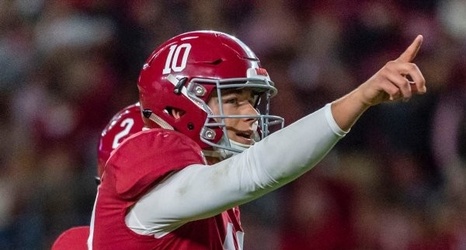 FAYETTEVILLE — In Arkansas defensive coordinator John Chavis' opinion, he faced the best offense he had ever shared a field with last season when top-ranked Alabama visited Reynolds Razorback Stadium.

Led by eventual Heisman runner-up quarterback Tua Tagovailoa and Biletnikoff Award winner Jerry Jeudy, the Crimson Tide hung a season-high 65 points and had 639 yards in their 34-point rout of the Razorbacks.

Alabama scored four times on explosive plays of 40-plus yards and proved to be the top quick-strike offense in the country.

However, when the teams meet again Saturday night in Tuscaloosa, Ala., Nick Saban's dynamic offense will likely be under new direction.