Mississippi State QB throws for 623 yards in upset of LSU 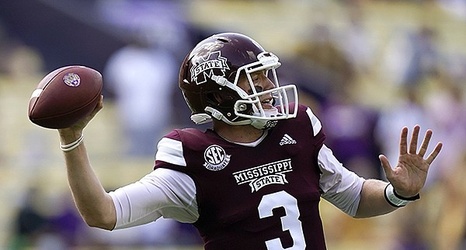 BATON ROUGE, La. — New Mississippi State coach Mike Leach put his “Air Raid” offense in the hands of a transfer quarterback who showed up over the summer and the results were like nothing defending national champion LSU or the Southeastern Conference has ever seen.

K.J. Costello passed for an SEC record 623 yards and five touchdowns and the Bulldogs knocked off sixth-ranked LSU 44-34 on Saturday.

“I don’t know if any individual could visualize this taking place,” said Costello, who was Stanford’s starter in 2017 and 2018 before head and hand injuries sidelined him last season.