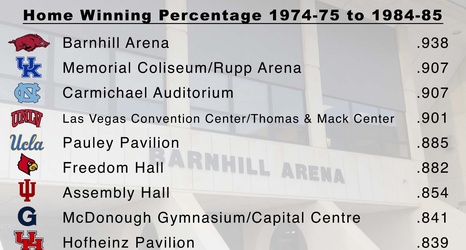 FAYETTEVILLE — When Eddie Sutton took the job as head coach at Arkansas, the Razorbacks’ Barnhill Arena was far from a home-court advantage.

Really, it was far from a true basketball arena.

Originally named Razorback Fieldhouse when it opened in 1955 (it was renamed for the late football coach and athletics director John Barnhill two years later), the building was constructed to give Arkansas’ football team a locker room and indoor workout area as much as it was to house the basketball team.

There were 5,000 seats and many went unused each game. In order to get to that capacity, portable bleachers from the football stadium next door were placed on the south end of the arena in front of a sawdust workout area for the football team.