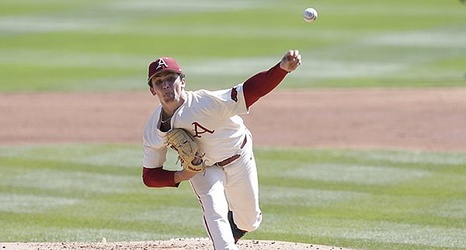 Arkansas pitcher Lael Lockhart throws during a game against Alabama on Sunday, March 21, 2021, in Fayetteville.

FAYETTEVILLE — As the old saying goes, baseball momentum is the next day’s starting pitcher.

Arkansas ended a three-game losing streak in time to win its series over No. 24 Alabama thanks to strong starting pitching.

Zebulon Vermillion gave the Razorbacks an 8-inning gem Saturday, and Lael Lockhart tied a career high with 9 strikeouts and did not allow a run in 4 2/3 innings during Arkansas’ 3-1 victory over the Crimson Tide on Sunday at Baum-Walker Stadium.