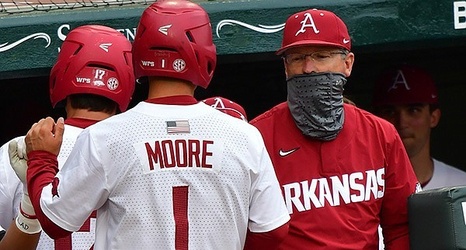 The move has rained out and given way to a cool, sunny afternoon. The temperature will be in the low 60s for the start of today's game, and likely in the mid-to-upper 50s by the end.

Arkansas is using this series to get several looks at lightly used players, or players in new positions. Some of the notable changes today include Robert Moore and Jalen Battles sitting out; Matt Goodheart at first base; Brady Slavens in right field; Cullen Smith at second base; and Jacob Nesbit at shortstop.

Casey Opitz is also back in the lineup at catcher.