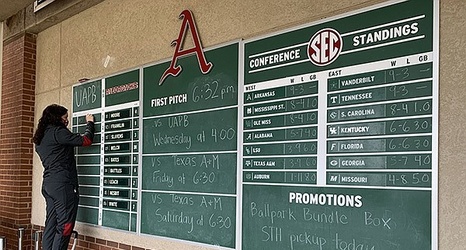 Starting lineups are posted prior to a game between Arkansas and Arkansas-Pine Bluff on Tuesday, April 13, 2021, in Fayetteville.

Statistically, this is the biggest mismatch of the year for the Razorbacks.

Arkansas dwarfs UAPB in most statistical categories, perhaps most of which are wins. The Razorbacks are 26-5 and ranked No. 1 in the nation; the Golden Lions are 2-19 and have lost 11 straight games.

Both teams will throw pitchers tonight who have struggled in recent weeks. Arkansas right hander Caleb Bolden has been inconsistent since a great four-inning relief appearance against Texas in the second game of the season, while UAPB right hander Joel Barker enters with an ERA over 14.