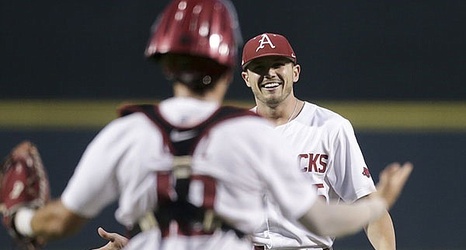 Arkansas pitcher Kevin Kopps (facing) is greeted by catcher Casey Opitz after the Razorbacks recorded the final out of an NCAA regional game against Nebraska on Monday, June 7, 2021, in Fayetteville.

The Razorbacks’ ace reliever was named the winner of the 34th Dick Howser Trophy as national player of the year. The award, which is voted on by the National Collegiate Baseball Writers Association, went to a relief pitcher for the first time.

The NCBWA also presented Kopps with its 16th Stopper of the Year Award as college baseball’s best relief pitcher.