Hogs taught Tigers a lesson in pronunciation in 2007 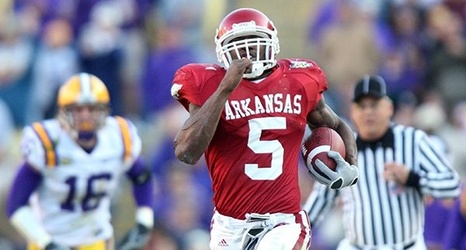 FAYETTEVILLE — We might never know why Les Miles mispronounced “Arkansas” during Thanksgiving week in 2007.

Maybe “Ar-Kansas” just popped out spontaneously for the LSU coach at his weekly news conference and he didn’t really mean the slight. With Miles, it’s hard to tell sometimes.

No matter the intention, the repercussions were mighty.

The Arkansas Democrat-Gazette had its fun that week, running a cartoon rebus in the editorial section to serve as a pronunciation guide for the linguistically erratic Miles: R + can + saw = Arkansas.

Coach Houston Nutt and the Razorbacks, in the midst of an up-and-down 7-4 season, certainly used the mistake to their advantage.