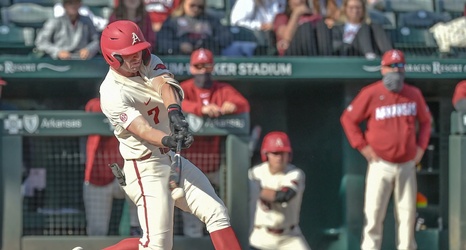 The No. 2 Arkansas Razorbacks and the No. 3 Ole Miss Rebels split a Saturday doubleheader after Friday night’s game was moved due to bad weather. Both teams sat at 7-2 atop of the SEC West going into the series as the winner would assume sole position of first place in the division. The Hogs won their ninth game this season when trailing by three or more runs by scoring seven straight runs to come back and win Game One 7-3 and stun a packed Swayze Field in Oxford, Miss. Arkansas would fall behind early again 5-0 in Game Two, but they would battle back within a couple of scores late in the game.