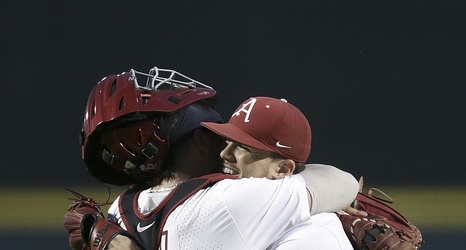 Right-handed pitcher Christian Foutch, a 2022 pledge, attended his school’s baseball banquet Monday and missed the 6-2 victory over Nebraska to advance to the Super Regional.

“I saw the highlights, and other teams are always trying to get to the Arkansas bullpen early, which Nebraska did,” Foutch said. “The fact that the titled closer Kopps can throw 81 pitches and only allow one run is something out of a video game.”

He praised catcher Casey Opitz’s home run to get the Razorbacks on the board along with center fielder Christian Franklin’s patient eye and Charlie Welch’s timely three-run home run.