Hogs had plenty of minuses to go around 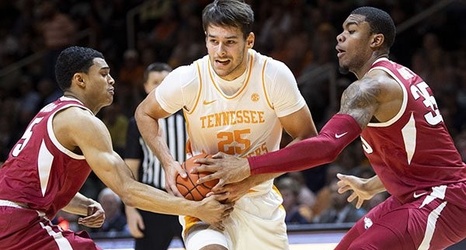 The University of Arkansas was going to run off the road and into a ditch, and that’s what happened Tuesday night against the Tennessee Volunteers.

With 19:34 to play in the first half Desi Sills hit a three-pointer for a 3-0 lead, and the Razorbacks would never lead again, eventually falling 82-61.

It would have been worse, a lot worse, if the Hogs hadn’t made 26 free throws on 36 attempts.

They had 15 total field goals, including five three-pointers.

Head Coach Eric Musselman doesn’t like excuses, but it was a short turnaround, having lost at Missouri on Saturday and then traveling on Monday to Knoxville.