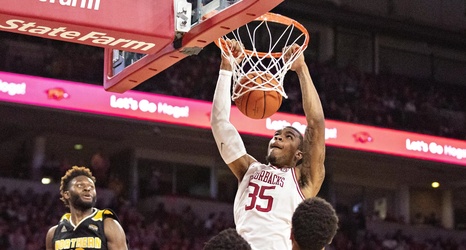 Tell me if this sounds familiar: Offense struggled for rhythm, but defense won the day, as the Hogs held off the opponents for a good win in a weird game.

That’s been the case in nearly every game as the 8-0(!) men’s basketball team has rolled to a great start. That’s 8-0 for the first time in 22 years, mind you. Musselman has instilled defense as a defining value, and the team has responded in kind. Even the guys who don’t usually get minutes are ready to defend, as a short cameo by Ethan Henderson resulted in him getting 3 blocks and 4 rebounds in very few minutes.