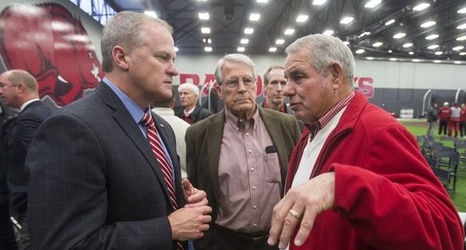 FAYETTEVILLE — A group of former University of Arkansas football players, led by Ken Hatfield, dropped in at Wednesday’s practice to show support for the Razorbacks.

Hatfield is known for his 81-yard punt return touchdown that propelled Arkansas to a 14-13 victory over Texas during the Razorbacks’ national championship season of 1964, and for leading the Hogs to a 55-17-1 record as head coach between 1984-89. Hatfield’s winning percentage of 76% is the best at Arkansas.