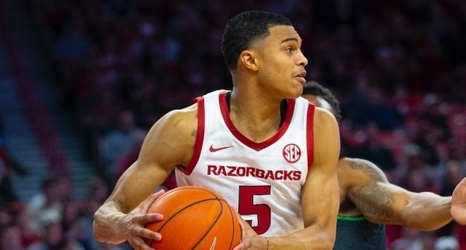 FAYETTEVILLE — Jalen Harris, coming off a redshirt season after transferring from New Mexico, ran the show for Arkansas offensively during the 2018-19 season.

That role, for the most part, was handed over this season to grad transfer Jimmy Whitt, who committed to Razorbacks coach Eric Musselman in May as a graduate transfer from SMU.

Whitt has starred at point guard for Arkansas through seven games, averaging 14.3 points on 53.8 percent shooting and a team-best six rebounds per game.

Harris led the Razorbacks in minutes played last season at 30.8 per game, but he accepted a reserve role and is seeing the floor just over 22 minutes per game as a junior.