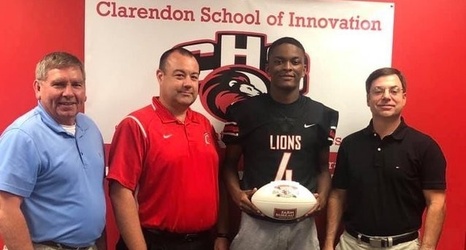 Arkansas 4-star cornerback commitment Jaylon Braxton enjoys cooking, hates snakes and lists his father as his role model because of his devotion to family.

He officially visited Fayetteville on June 17-19 and also made trips to Michigan State, Baylor and Miami. Braxton is rated a 4-star recruit by all four major recruiting services.

Favorite thing about playing cornerback: Being able to take away a team’s best receiver

Coach Dominique Bowman is: Very intelligent, funny, and just a vibe to be around

If I couldn't play football, I would want to star in: A superhero movie

My mom is always on me to: Fold my clothes

What superpower would you choose if given the option: Invisibility

My two pet peeves are: Smacking and mustiness

If you could meet a famous person, who would it be: The Rock

My hidden talent is: Cooking

Your favorite fast food chain and why: Raising Cane's, because it is always consistent.