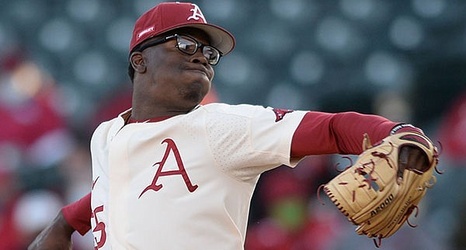 Arkansas reliever Gabriel Starks delivers to the plate Wednesday, April 7, 2021, during the eighth inning of the Razorbacks' 10-3 win over UALR at Baum-Walker Stadium in Fayetteville.

Tole and fellow freshman right hander Gabe Starks each pitched one scoreless inning in relief, providing Arkansas fans a glimpse of pitchers who could factor into the Razorbacks' future plans.