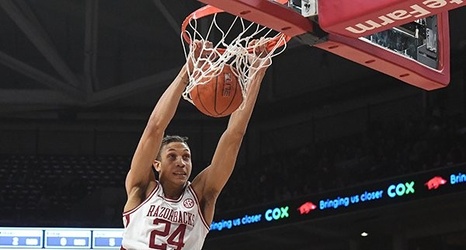 Arkansas forward Ethan Henderson dunks during a game against LSU on Wednesday, March 4, 2020, in Fayetteville.

A Little Rock native, Henderson committed to Texas A&M on Saturday, according to a post to his Twitter account. The 6-8 forward announced Wednesday his intentions to transfer from Arkansas.

He was one of two scholarship players to enter the transfer portal following the team’s Elite Eight run, joining guard Desi Sills. The former Jonesboro standout has not announced a transfer destination.