Drinkwitz queried; Kiffin's out of play 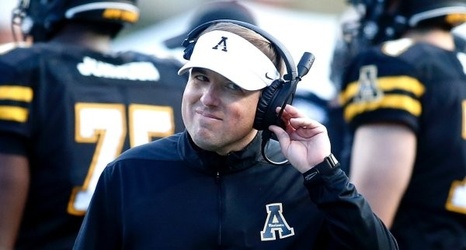 FAYETTEVILLE -- With Ole Miss announcing Lane Kiffin as the Rebels' new coach Saturday, Appalachian State Coach Eliah Drinkwitz could be in play for the University of Arkansas job.

Kiffin, who completed his three-year stint at Florida Atlantic with a 49-6 victory over Alabama-Birmingham in the Conference USA Championship Game on Saturday, and Drinkwitz both interviewed with Arkansas Athletic Director Hunter Yurachek and deputy athletic director Jon Fagg last week.

After Drinkwitz, an Alma native, led the Mountaineers to a 45-38 victory over Louisiana-Lafayette in the Sun Belt Conference Championship Game on Saturday in Boone, N.C, he was asked about speculation he could leave Appalachian State.