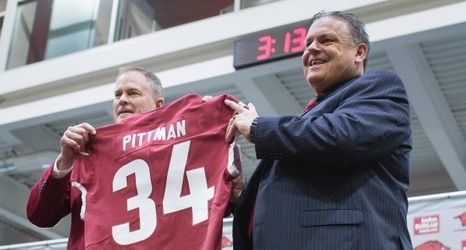 FAYETTEVILLE -- Sam Pittman grew up about a 21-mile drive from the Arkansas state line in the northeastern Oklahoma hamlet of Grove.

But he's a Razorback at heart.

Pittman, 58, never dreamed he might one day be the head coach at the University of Arkansas when he made the 75-mile drive to a Lou Holtz football camp here in 1979, but that's his new job in his first major college coaching gig.

Six years after taking a three-year job with the Razorbacks as offensive line coach before moving on to Georgia, Pittman was named the 34th head coach at Arkansas on Sunday.