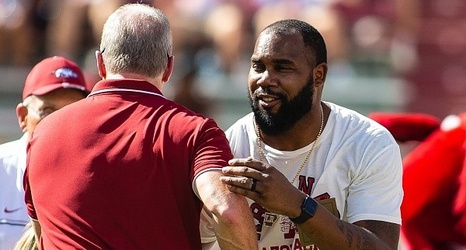 Darren McFadden’s football career at the University Arkansas provided moments that are etched in the memories of Razorback fans, but maybe nothing resonates as loudly as his postgame CBS interview after the Razorbacks’ 2007 upset of No. 1 LSU.

McFadden, guest speaker at the Little Rock Touchdown Club on Monday, was introduced to the crowd of 400 with a video capturing his emotions and that of his head coach Houston Nutt after a 50-48 triple-overtime victory at Tiger Stadium in Baton Rouge.