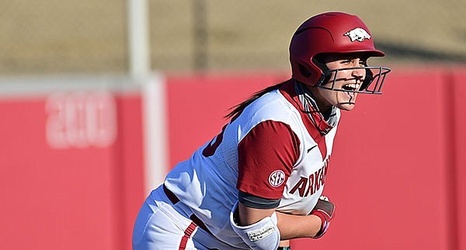 FAYETTEVILLE -- It was a grand time for the No. 20 Arkansas softball team Thursday at Bogle Park.

The Razorbacks opened the Woo Pig Classic with a doubleheader sweep of Drake, as both games were won with come-from-behind grand slams. Kayla Green did the honors in Game 1, while Danielle Gibson ended Game 2 in walk-off fashion.

Arkansas (13-2) defeated the Bulldogs 6-3 in the opener, before sweeping the nightcap, 6-4. The Razorbacks have now won 12 consecutive games and remain a perfect 9-0 at home.