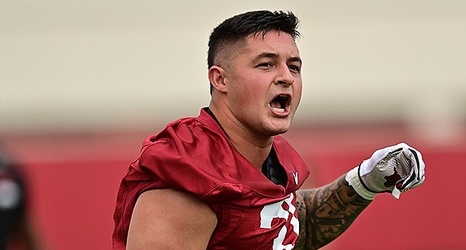 Arkansas senior linebacker Grant Morgan could have easily rode off into the sunset at the end of the 2020 season.

Instead he chose to saddle up again for the Razorbacks, one of nine players who took advantage of the extra year the NCAA afforded to players who were affected by the covid-19 pandemic.

Morgan's return was due in large part to Arkansas coach Sam Pittman, who Morgan said brought toughness back to the program.

“Pittman, he brought back football like Arkansas is supposed to be, the hard-working, the tough, the physical,” Morgan said. “You go look at any good Arkansas team, like Darren McFadden was fast, but he would run people over.