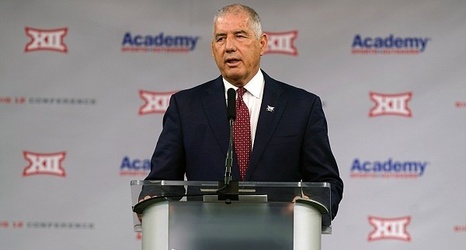 Big 12 Commissioner Bob Bowlsby accused ESPN of encouraging other conferences to pick apart the league so Texas and Oklahoma can move to the Southeastern Conference more quickly and without paying a massive buyout.

"I have absolute certainty that they (ESPN) have been involved in manipulating other conferences to go after our members," Big 12 Commissioner Bowlsby told The Associated Press on Wednesday after sending a cease-and-desist letter to the network.

The letter addressed to ESPN executive Burke Magnus, President of Programming and Content, said the Big 12 had become aware the network had taken actions "to not only harm the Big 12 Conference but to result in financial benefits for ESPN.