Belief in Jefferson stems from QB's mix of fun and focus 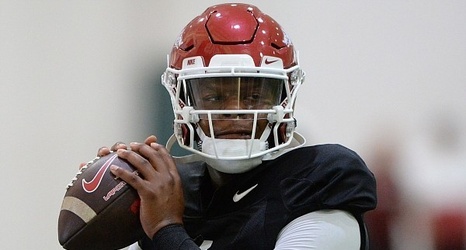 Arkansas quarterback KJ Jefferson throws Thursday, Aug. 12, 2021, during practice in the Willard and Pat Walker Pavilion on the university campus in Fayetteville.

FAYETTEVILLE — On first thought, Missouri football coach Eli Drinkwitz is more than fine with waiting for the final week of the regular season in late November to face KJ Jefferson.

Until Arkansas takes the field against Rice on Saturday, Drinkwitz remains the last coach to get an up-close-and-personal look at the Razorbacks’ 6-3, 245-pound dual-threat quarterback in a starting role. He recalls a player in the teams’ Dec.