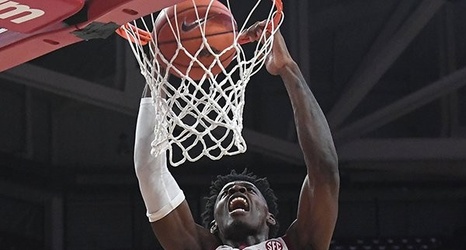 FAYETTEVILLE -- University of Arkansas men's basketball Coach Eric Musselman got "Artested" by Adrio Bailey in the Razorbacks' 91-43 victory over Rice on Tuesday night.

That's how Musselman refers to a player putting himself into a game.

The Razorbacks were leading the Owls 73-33 with 7:56 left in Musselman's Arkansas debut when Bailey got off the bench and checked in for Ethan Henderson during a media timeout.

"Adrio Bailey -- first time ever since Ron Artest -- actually subbed himself back into a game," Musselman said in his postgame news conference. "I was a little bit shocked.