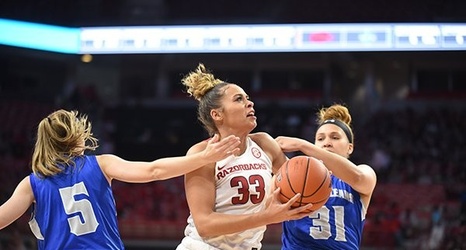 FAYETTEVILLE — A short bench was no problem for Arkansas in its season opener Friday morning.

Chelsea Dungee scored a game-high 22 points and the No. 22 Razorbacks defeated New Orleans 82-52 at Bud Walton Arena. The game was dubbed “Elementary Day” and those in attendance included around 5,600 students from local schools.

Amber Ramirez hit two 3-pointers during the run, part of a 12-for-37 performance from beyond the arc for the Razorbacks. Dungee made five 3-pointers, and Ramirez and Alexis Tolefree made four apiece.