Arkansas turns to a familiar Hog 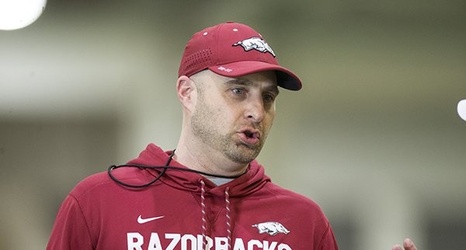 FAYETTEVILLE -- Former University of Arkansas quarterback Barry Lunney Jr. now holds the reins of the program he led to its first SEC West championship 24 years ago.

Lunney, a Fort Smith native and Arkansas quarterback from 1992-95, was tabbed by UA Athletic Director Hunter Yurachek to serve as interim head coach Sunday after the firing of coach Chad Morris.

The Razorbacks dropped to 2-8 after Saturday's 45-19 loss to Western Kentucky.

Lunney, 45, is the longest-serving current Arkansas football assistant in his seventh season. He has been tight ends coach since joining Bret Bielema's original staff in 2013, and he added special-teams coordinator to his duties this season.