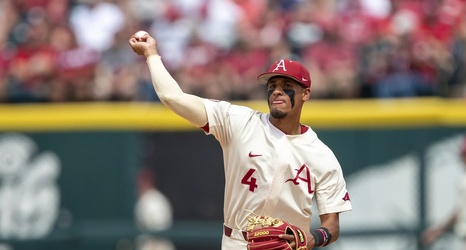 Arkansas had a slow start offensively but found a way to retire Vanderbilt’s ace, Kumar Rocker early on to sail to a _____ victory on Thursday night.

Vanderbilt got busy early when Franklin lost the baseball in the air that fell between him and a couple of other Hogs. That helped set up a two run RBI double by CJ Rodriguez.

Rocker buzzed through the Arkansas lineup in the first inning retiring his first three batters.

An RBI single by Ethan Bates and a hit by pitch on Matt Goodheart would bring two runs in to tie the ball game.