Almost There: 18 Days Til Razorback Football 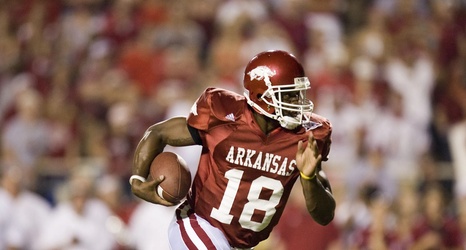 Arkansas needed to find the endzone quickly if they wanted to win their final home game of the 2007 season. After scoring 21 points in the first quarter South Carolina, coached by Steve Spurrier, found a way to stay in the game pulling within eight points in the third quarter.

The Razorback offense was potent and could score at any time. The Hogs averaged 38 points per game which was 13th in the country in 2007.

With use of the “Wild Hog” package the Arkansas offense moved the ball effectively. That included a 14 yard run by Darren McFadden before the very next play.