Arkansas vs. UTEP Preview and Prediction 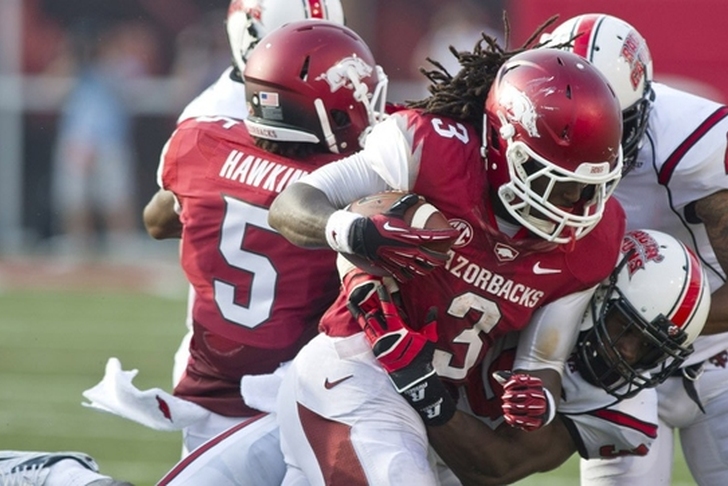 The first week of the college football season continues with the No. 18 Arkansas Razorback hosting the UTEP Miners Saturday. Arkansas harbors hopes of a SEC title, while UTEP wants to go to a second straight bowl game. Arkansas is heavily favored in this contest.

The Razorbacks play in the vaunted SEC West, which means they'll have to fight for every conference win. Some are expecting a possible SEC title run this year after Arkansas improved from three wins to seven in Bret Bielema's second season on the job. Led by a great offensive line and ground game, Arkansas should be able to control the clock in many of its games. Senior quarterback Brandon Allen is one of the few experienced QBs in the SEC, although the defense does have some holes.

The Miners are coming off their first winning season in nine years. Running back Aaron Jones is the lynchpin of the offense and he'll get a ton of touches each game. The 5-foot-10, 190-pound Mack Leftwich is the new starting QB. He's a dual-threat, so expect plenty of option plays from UTEP offense. The UTEP defense isn't bad, and was actually 15th at stopping the pass last season. The Miners return seven starters on the defensive. The run defense isn't as good as the pass defense, and that could be a problem for the Miners in this contest.

What To Watch For: Arkansas' Ground Game

With his partner-in-crime, senior Jonathan Williams, out for the season, junior Alex Collins is now the feature back for the Razorbacks. Arkansas loves to run the ball and that shouldn't change with Williams out. The real question is if another tailback steps up to help Collins shoulder the load. If not, Collins could double his 1,100 yards and 12 touchdowns from last season.

It should be a quick game, as both teams will try to run the ball a lot. This has the making of an easy win for Arkansas. The Razorbacks are better at every single position. Alex Collins should have a big day, if he stays in the game long enough.

Follow our Arkansas Razorbacks team page for all the latest Arkansas news and rumors!