Will the Arkansas Razorbacks Make it to the NCAA Tournament? 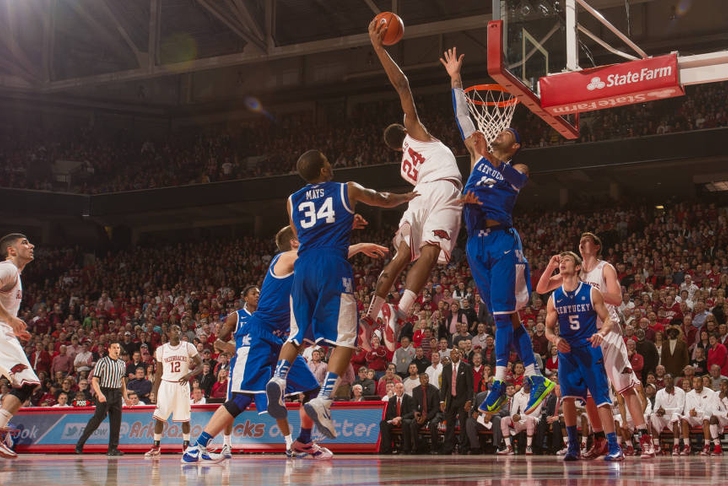 It's no secret that the Razorbacks show great potential when playing on their home court. It's also no secret that they haven't shown much potential at all during road games...until now. The Hogs swept Kentucky this season, beating them first at home and then in Lexington. Both games went into overtime, where Arkansas took control.

"It was good to see our guys come out on the right side of things, after so many overtime games." Coach Mike Anderson said. Not only did Arkansas win the game, but they led for a majority of it.

Does winning one of the most important road games prove that Arkansas should see a spot in the tournament?

e the tournament was in 2008, when they defeated Indiana in the first round and lost to North Carolina in the second.

The last time Arkansas won the National Championship was in 1994, when they beat Duke 76-72.

The Hogs have three more games left on their schedule—two home, one away. If the Razorbacks want to prove they are good enough to advance forward, it would be a good idea to win out. They stand at a 19-9 record, 8-7 in the SEC. Their signature win against Kentucky made the light to the tournament a little bit brighter.

The team seems to be on a hot streak. They were perfect from the free throw line against Kentucky, which is a major step up from the beginning of the season. Kentucky's coach, John Calipari, admitted, "We took two steps back today. Give them credit, they played hard." It will be interesting to see if the Razorbacks can keep the streak going.

ber one team in the nation. They haven't had the opportunity to redeem themselves.

Assuming that Arkansas will win at least two of their last three games, it wouldn't seem right to keep a team with 21 wins and two wins over Kentucky out of the NCAA tournament.

Who knows? Maybe they'll pull out the Cinderella role and win a championship. Who is willing to bet on the Hogs in their brackets?

Want this story (and the rest of your sports news) on your phone? Check out the Chat Sports mobile app - download here. http://bit.ly/1emlMCS

For more articles on the Razorbacks and more, visit my Chat Sports writer profile: http://www.chatsports.com/writer/tatum-woods