How the Arkansas Razorbacks Can Improve at Home and Away 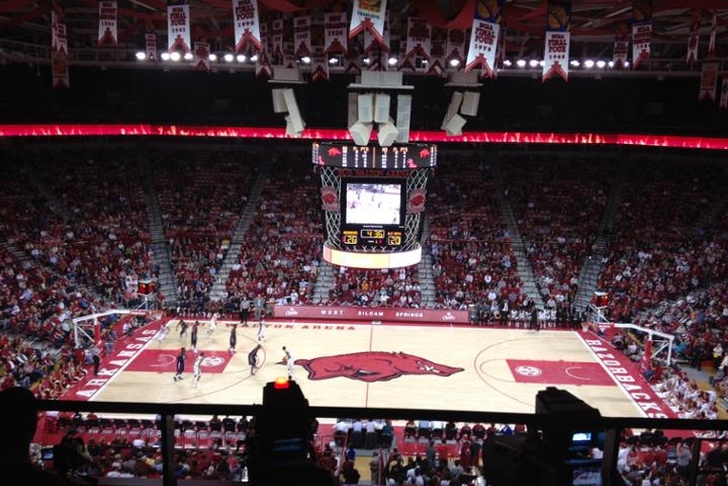 The Arkansas Razorbacks men's basketball team has already been up and down this season. Before they started their SEC schedule, they were winning games - then the conference games started. The team kept taunting us with flashes of potential, but blown away games have driven fans up the wall. If the team wants everyone to recognize their talent, they need to earn a win on the road in the SEC.

Let's take a quick look back at their SEC games so far this season:

The first conference game Arkansas played was at Texas A&M, where they lost 53-69.

The next three games went to overtime, the most consecutive overtime games in program history. The first was a home matchup against Florida, which the Hogs lost 82-84.

The second game was also in Arkansas against Kentucky, where Michael Qualls pulled off an amazing last-second dunk to win the game for the Razorbacks, 85-87

The third was in Georgia, where Arkansas fell 61-66 to the Bulldogs. This was the first game this year where the Razorbacks didn't reach 70 points.

There seems to be a pattern that Arkansas can't overcome -they aren't winning away games. The Hogs perform better on their home court then they do against opposing teams, and while that's a common problem, it's costing them too many games. The loss to Florida came at home, but at least in that game the Razorbacks played aggressively and left it all on the floor.

Maybe it was the encouragement from the home fans that gave Arkansas the confidence to beat a ranked, highly-favored Kentucky team. If the team wants everyone to recognize that the Kentucky game wasn't a fluke, they need to end their winless streak on the road. There are a few key things the team can do to not only continue their performances at home, but win away games as well:

1. Make free throws: Let's face it - the Razorbacks haven't been great shooting from the line.

In many cases, especially against Florida, it was the reason they couldn't win the game. Against Georgia, Arkansas made just 12 of their 20 free throws. Leaving points on the floor like that is just unacceptable, and for a team with this much potential, it just can't be allowed to continue.

2. Rebound the ball: Again, in the Georgia game, the Hogs were out rebounded 56-34. Rebounds are an incredibly important factor in winning basketball games. On either end of the court, you need to be aggressive enough to rebound missed shots, and if you let the other team grab 20+ more rebounds than you, you aren't going to win very often.

3. Don't take careless shots: When the Hogs are under pressure, they rush and take shots that everyone watching knows won't go in. Players who aren't three point shooters shouldn't be trying to make long, contested jumpers. If you have 15 seconds left on the shot clock and you don't have a good shot, pass the ball to someone who does.

4. Stay confident: Unfortunately, the Razorbacks have a hard time coming back after they lose a lead. In most of the games they've played, they've led for the entire game until there are just a few minutes left. This happened in all three overtime games, and each time it ended up costing the team.

5. In overtime, push harder: Basically, do what you did in the Kentucky game. Fight for it. Find that extra gear. Make free throws, rebound the ball, play smart defense, take smart shots, and if the ball bounces off the rim in the last seconds, pull a Qualls and dunk it.