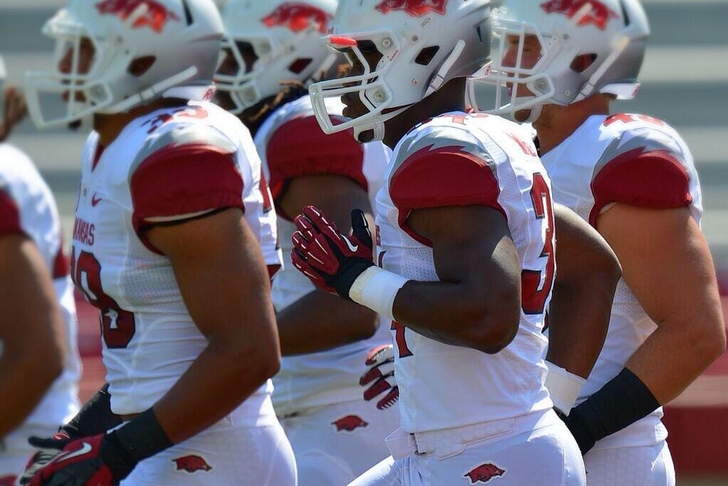 The Arkansas Razorbacks faced last season's championship runner-ups, the Auburn Tigers, in their first game of the season. After a hard-fought game that included a lightning delay and assistant coaches getting trapped in an elevator, the Hogs were defeated 21-45.

Fans can already see a much-improved Arkansas team, and they were at their best in the first half of the game.

Here are five takeaways from the Razorbacks' tough season opener:

However, after halftime, Auburn stepped up their defense and held Arkansas scoreless in the second half. 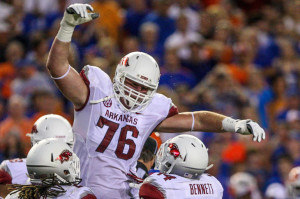 2. The offensive line is bigger & stronger:

During the first half of the game, you could drive trucks through the holes the offensive

linemen were creating. Running backs Alex Collins, Johnathon Williams and Korliss Marshall took advantage and rushed for 151 yards in the first half.

Whether it was fatigue or shaken confidence, the O-line couldn't perform in the second half, leaving nowhere for the running backs to go.

3. Those running backs are talented:

Collins, Williams and Marshall are three great weapons for Arkansas. All three have shown serious potential, and they'll continue to improve over the course of the season. With Allen passing the ball more often, the backs should be under less pressure and have more opportunities. Williams scored one of Arkansas' three touchdowns, and against another opponent, he could have had more.

What these three players (and the offensive coaching staff) need to work on is running the ball to the outside. Once Auburn realized they were almost entirely going north/south, they shifted their defense to close the hole, and the running game immediately became much less effective.

Fans have worried about Allen's performance on the field, but he showed more potential against Auburn then he did all season in 2013. Allen proved that the Razorbacks won't have to rely solely on the run game.

Allen threw for 175 yards, two touchdowns and one interception. He showed confidence and good decision-making early in the game, but lost his edge in the second half along with the rest of the team. 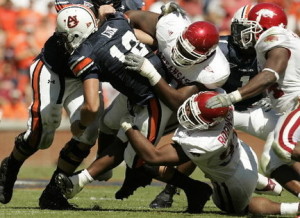 The weakest part of the Hogs performance was the defense. Players were trying too hard to make highlight-reel plays, and there wasn't enough emphasis on wrapping up and taking them down. Many players should have been stopped at the point of first contact, but slipped through weak tackles to break off long plays or touchdowns.

The defense made some good plays and forced Auburn to punt on a few occasions, but when you're playing the #6 ranked team in the country, you can't mess up the basics.

Overall, the entire Arkansas team started strong but struggled in the second half. The Razorbacks must work on keeping momentum going from start to finish - if they'd done that Saturday, we would have seen a very different final score. That being said, there have already been significant improvements, and everyone is seeing them.