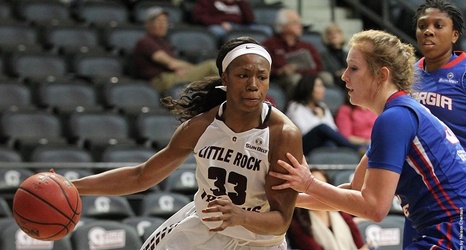 LITTLE ROCK, Ark. – History was made Thursday at the Jack Stephens Center, but not in the way the Trojans wanted it to be made.

With Little Rock Head Coach looking for his 800 career win, Texas State (9-14, 2-10 Sun Belt) used a fourth quarter surge to claim their first-ever win in Little Rock with a 50-47 final at the Jack Stephens Center.

, who led the Trojans with her first career double-double, scored seven of her 13 points in the final quarter while also grabbing three of her 11 rebounds.