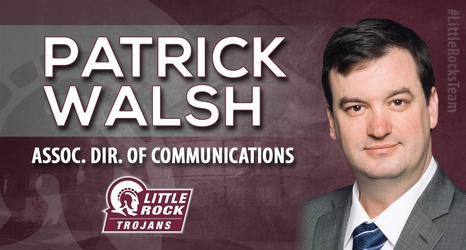 LITTLE ROCK - Little Rock Athletics today announced the addition of Patrick Walsh as the Trojans' Associate Director of Communications. A winner of nearly two handfuls of College Sports Information Directors of America (CoSIDA) national publications awards and multiple other writing and promotional honors, Walsh will serve as the primary contact for women's basketball, volleyball, cross country and track and field.

Prior to joining Little Rock's Team, Walsh spent two years at Indiana State. While in Terre Haute, he was responsible for growing the social media presence of the Sycamores, promoting the softball program during two of the most successful offensive seasons in school history in consecutive years and a women's basketball program that was challenged with constant change with three head coaches (two permanent and one interim) in an 18-month span.