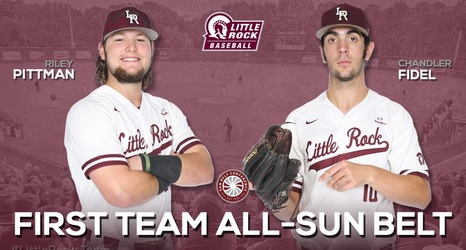 NEW ORLEANS, La. - Chandler Fidel and Riley Pittman each received First Team All-Sun Belt honors for their outstanding 2019 seasons, announced Monday afternoon by league officials. Both Trojans are receiving the recognition for the first time in their careers.

As Little Rock's Friday-night starter, Chandler Fidel, earned first-team honors as a starting pitcher. The junior finished the regular season with a career-best 3.52 ERA while posting a 5-4 record in his 14 starts. The Garland, Texas native led the Sun Belt in innings pitched (94.2) during the 2019 season, and also finished third in the conference in both ERA and strikeouts (96).