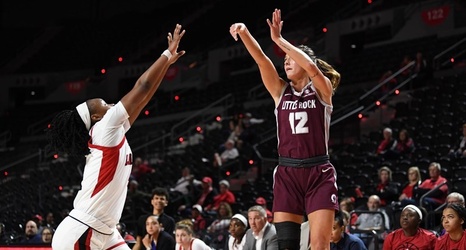 LAFAYETTE, La. – The scene was set for another thrilling comeback for Little Rock. For the second consecutive game, the Trojans trailed by 13 to start the final quarter before slowly creeping back. But trailing by three with the final seconds ticking away, the season came down to a last second, game-tying 3-pointer that ricocheted off the rim in a 49-46 loss to No. 4 Louisiana Wednesday evening.

The crowd of 369 at the Cajundome collectively held their breath as Sydney Chastain's game-tying attempt failed to go in, which came as a surprise as the senior finished the game with an impressive 5-for-9, 13-point performance that included three treys.