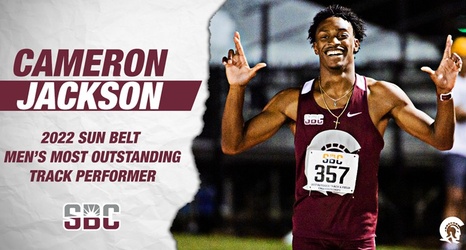 NEW ORLEANS – Little Rock's Cameron Jackson refused to be denied at the 2022 Sun Belt Outdoor Track and Field Championships. The rest of the league took notice.

Less than a week after winning three gold medals, setting a school record in the 200m dash and ending the championship meet as the Top Meet Scorer with 22.5 points, Jackson was named the league's 2022 Men's Track Athlete of the Year by a vote of the league's coaches.

Only a sophomore, Jackson becomes just the second Little Rock athlete to ever lay claim to the honor following Leo Settle in 1998.