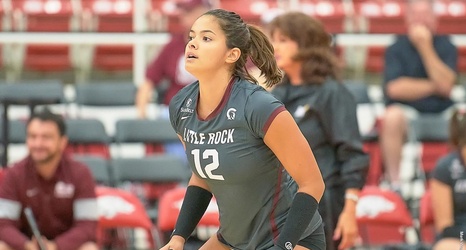 MARTIN, Tenn. – recorded her second straight double-double and led all players with 11 digs but UT Martin was able to overpower a depleted Little Rock squad, 3-1, in the Skyhawk Invitational Saturday.

Barbosa, who also matched a career-high two service aces, put down 17 kills alongside 10 digs, hitting .240 in the match. Little Rock (2-9) played only eight players due to a plague of injuries with seven seeing court time for most of the match. UT Martin (3-10) took advantage of a depleted Trojan squad, hitting .278.

Behind the Box Score