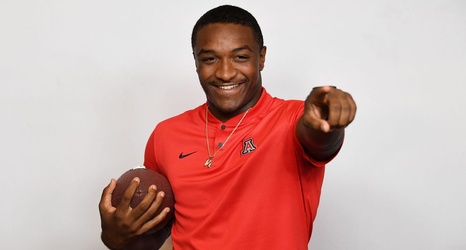 Former Arizona Wildcats quarterback Khaili Tate has started a clothing line and Arizona State fans are not happy about it.

Earlier this month, Tate, who had some very impressive games in October of 2017, unveiled some hoodies and shirts with the words "Mr. October College Football."

The clothing items can be purchased at khaliltate14.co (with the hoodie starting at $40 and the shirt from $25).

ASU fans were not amused, pointing out the fact that there is only one "Mr. October" and he is legendary former ASU baseball player Reggie Jackson.

In October of 2017, Tate took the college football world by storm, throwing for 743 yards and six touchdowns and rushing for 840 yards and seven touchdowns in four games that month.