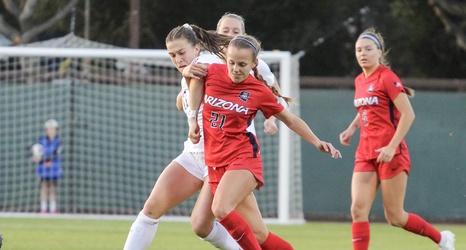 We will be profiling Arizona soccer’s returning players before they return to campus. The previous renditions can be found here. Next up: junior Iliana Hocking.

As Penelope Hocking scored a whopping 18 goals at USC last season, her fraternal twin sister Iliana Hocking had a successful year at Arizona, only in a much different way.

The defensive-minded midfielder appeared in all 20 matches for the Wildcats, making seven starts and netting three goals, both of which were career highs.

The daughter of former Minnesota Twins infielder Denny Hocking, Iliana was a top-60 recruit out of Anaheim’s Canyon High School, and picked Arizona over Texas A&M due to its proximity to home and the overall atmosphere on campus.