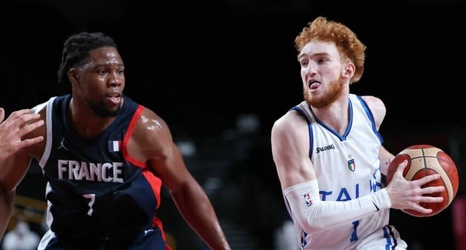 Italy's Niccolo Mannion (R) runs with the ball past France's Guerschon Yabusele in the men's quarter-final basketball match between Italy and France during the Tokyo 2020 Olympic Games at the Saitama Super Arena in Saitama on August 3, 2021. (Photo by Thomas COEX / AFP) (Photo by THOMAS COEX/AFP via Getty Images)

Following a decent first season in the NBA and a remarkable run at the 2020 Summer Olympics, former Wildcat Nico Mannion is heading to Italy.

Making his long-anticipated professional appearance this past season in the NBA, former Wildcat Nico Mannion saw decent success with the Golden State Warriors organization, as the dynamic and athletic guard split time at the professional and G-League levels.